Health workers are on the first line of contact with the epidemic and are at risk of infection with the pathogen of the epidemic (in this case covid-19). Risks include exposure to pathogens, long working hours, stress, fatigue, occupational burnout, stigma and physical and mental violence. The rights, roles and responsibilities of health care workers 2 highlights the rights and responsibilities of health care workers, including the specific measures needed to protect safety and health at work.

Since the beginning of the covid-19 pandemic, health workers have been on the front line. Many employees paid for their work with their lives. This was the cost of working in hospitals, but also in the healthcare sector in general, because of insufficient protective equipment.

The media, public authorities and citizens therefore recognise nurses, doctors and other health workers as true heroes. In many places in Europe, recordings of applause from a window or balcony have become an internet hit every evening at 8 p.m. and will surely be one of the most important memories of the public’s response to the coronavirus.

But these expressions of gratitude are not just empty gestures. They were part of wider activities, such as the preparation of meals for hospital staff by both Michelin-starred restaurants and ordinary people, or the spontaneous creation of huge stocks of medical protective clothing by individuals and companies. Symbolic support was also of a visual nature. In towns and villages across Europe, everything from visual expressions of gratitude to medical staff, banners hanging on balconies, to drawings of children pasted on Windows, has sprung up.

Nurses and doctors are portrayed as the new superheroes of those turbulent times, if only in murals that flourished in public spaces, for example in Poland and Italy, and were then filmed or photographed by the media. In Romania, the communication agency even had the idea to portray them as saints and gods, and the inspiration was to be religious images (which outraged some religious leaders). 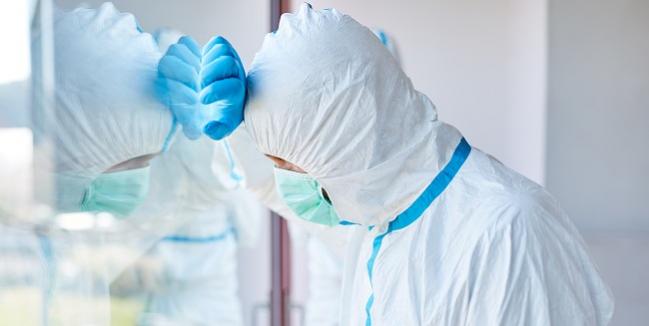 Whether they are heroes or Saints, however, health workers are also exposed to fear and mistrust. In several European countries, the media report acts of discrimination and even hostility towards them from neighbours who are afraid of infection. Fortunately, these incidents were often offset by further expressions of support and solidarity.

First of all, health workers in various ways expressed their gratitude to the people who supported them. But they also protested on a massive scale across the continent against the lack of protection that made them vulnerable to the virus. German doctors, inspired by one of the French doctors who started a similar action, photographed themselves and filmed naked. It was meant to symbolize the lack of protection against the coronavirus.

Both types of protests seem to underline support for the pressing need for greater long-term investment in the public sector, one of the pillars of which is health. A strong social security framework and a robust health care system were some of the main ideas of post-war Europe, even if their implementation varied from country to country. Some say that it is good to applaud at 8 p.m., but we should not forget that in the last few decades there have been drastic cuts in health systems. Who will take care of the medical staff when the pandemic is over?